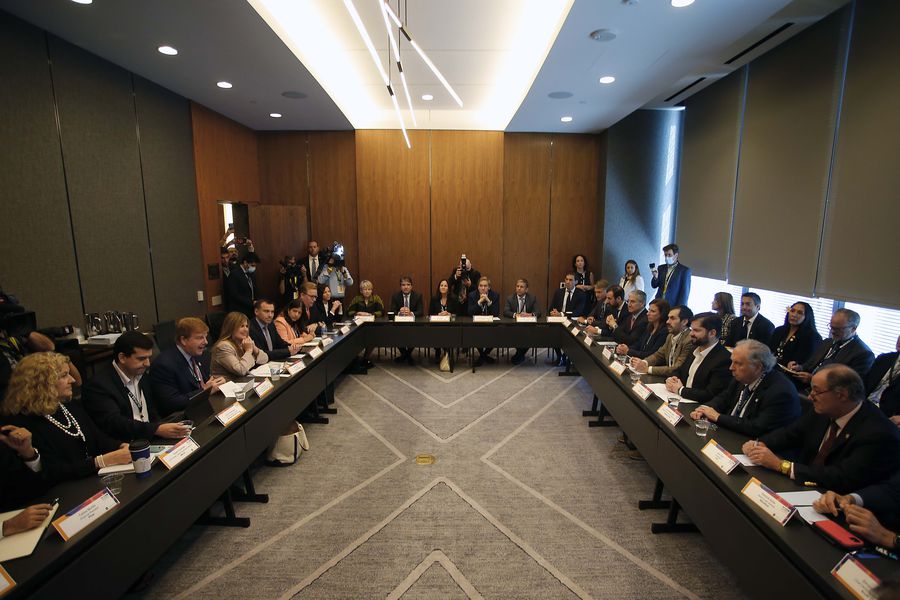 During a meeting organized by the United States Chamber of Commerce and the Chilean Chamber of Commerce of North America (AmCham), which began at 4:00 p.m. in Los Angeles (7:00 p.m. in Chile), President Gabriel Boric shared this Tuesday in the United States with senior executives of companies from that country present in Chile. About thirty large companies were invited to the event.

Among those who have been invited to the call round table Luis Valdés, Chilean president of Principal International, the local control firm of AFP Cuprum, was present. The executive sat just three seats behind Boric, who in turn was flanked by Chile’s Ambassador to the United States, Juan Gabriel Valdés, and Economy Minister Nicolás Grau.

The guest list included Juan Ignacio Rubiolo, President and Executive Vice President of International Affairs for AES Andes; Shannon Kellogg, for Amazon; Ernesto Torres, CEO of Citibank Latin America; Marcos Araujo, CFO of Coca-Cola in Latin America; Susan Greenwell on behalf of Metlife, the company that controls AFP Provida in Chile; and Carlos Murillo, regional president of Pfizer. There were also representatives from Prudential, a company that has a stake in AFP Habitat; as well as executives from Google, Microsoft, Fedex, BlackRock, Bank of America, among others.

In addition to the American executives, local union officials were also present: Juan Sutil, of the Confederation of Production and Commerce, and Bernardo Larraín Matte, former president of Sofafa.

Government sources assured that the president had a very good impression of the tone of the talks with the American business community. Moreover, the appointment was extended much longer than planned, precisely because Boric wanted it so, so his agenda was delayed by about an hour. This was reflected when advisers approached him to remind him that he had to attend another meeting, but he replied: “No, I want to stay”.

Those who knew the content of the meeting ensure that there were many discussions on the question of pensions. Insurer supervisors and AFPs welcomed the end of levies on pension funds, but they asked for more certainty on the pension reform to come, and they also said they wanted to participate in the process of modifying the system. .

Regarding the course of the constitutional process, the sources present indicate that it was approached in general terms and that the president saw greater restraint from American businessmen compared to the Chilean right.

After the meeting, the representative of the AFP Cuprum monitoring company, Luis Valdés, said that although the meeting was supposed to last an hour, it ended up being much longer than that. “Little was said about the constituent process, the central point was the relationship between American investors and the new government,” Valdés explained.

He added that “the president had prepared a speech, and the truth is that I would say that he was quite surprising by what he said and how he raised things: a very modern vision of the opportunities that Chile offers to foreign investors. He was also very clear about the type of relationship he expected when it came to foreign investment.

The executive went on to say that “it was a very positive approach, I think there was a lot of energy and encouragement at the end. Granted, there are many different sectors, from finance, to pensions, to energy, to education, so it’s hard to summarize everything well, but it’s important to point out that U.S. foreign investment in Chile represents a stock of 40 billion dollars, it is extremely important and significant for the country, and I imagine that the important thing is that this investment grows”.

Valdés also pointed out that “there were certain concepts that the president dealt with, I took some notes, but he certainly sees very well foreign investment as a partner of the country, collaboration between governments and parties private. Not only does investment make sense to him, but also technology transfer, i.e. cooperation and knowledge transfer, he has repeatedly emphasized this. I think there’s a lot more to do.”

Asked what was discussed regarding the pension reform, which was invited to be part of the reform, Valdés said that “the necessary consultations will be channeled through AmCham so that… You must understand here that the foreign investment in the area of ​​financial services and more particularly in the chapter on pensions, is extremely important, here we have rather important figures, between 4.5 and 5 billion dollars which have just been invested by three companies , which are Principal, Prudential and Metlife. This is a sum that represents more than 10% of all American foreign investment in Chile, of the stock, therefore, what has been requested by AmCham seems to me very appropriate and, certainly, accepted by the chair.” This, “about having a formal query channel.”

For her part, Paula Estévez, CEO of AmCham, who was also present at the meeting, said that “we appreciate President Boric’s willingness to meet with American companies, in a space of honest and cordial conversation”. He said that “it was a very good example, (…) where we had the opportunity to discuss shared visions to move towards inclusive and sustainable economic development”.

The executive added that “we address the importance of moving forward with the changes the country needs with certainty and a long-term vision to continue attracting foreign investment, as well as the relevance of public-private collaboration for contribute to the well-being of people.” Finally, he said that “issues fundamental to the promotion of American investments and the sustainable economic development of Chile were discussed, as well as issues in which American companies have extensive experience and best practices, such as climate change , diversity and inclusion and the role of the digital economy”.

From the government, it was clear that their interlocutors were some of the most senior business leaders in this country, because of the operations they already have in Chile, or because of possible new investments they could make locally. The idea, according to well-informed sources, was to communicate to businessmen the government’s economic plan, particularly with regard to foreign investment, as well as to underline that at the local level there is legal certainty and a good institutional framework, despite the fact that the country is going through changes.

In fact, President Boric talked about it before this meeting. After a meeting with the mayor of Los Angeles, Eric Garcetti, he spoke about what he expected from the meeting with the businessmen. He indicated that during this meeting he would seek to inform businessmen “of the current situation in Chile and that they know that our country is a safe and desirable place to invest and that we can grow together”.

To the above, he added that “we are absolutely clear that to move forward, to improve our living conditions, we must work together the public sector and the private sector”.

Asked about the reception of the North American business community with regard to the constitutional process and the structural reforms that his government is promoting, the Head of State assured that the reception he received from the CEOs of Canadian companies, as in some preliminary conversations he had in the United States, “is overwhelmingly positive.”

“The world’s businessmen understand that it is necessary to change and improve our institutions to adapt them to current times. And that is exactly what the constituent process sought, from my point of view,” Boric added.

He said that there is a high assessment of Chile’s institutional strength by the business community. “And the feeling that I had, at least in conversations with different business leaders from different countries, is that they appreciate that in Chile we have opted, in a moment of crisis, for more democracy. C This is what the constituent process means: more democracy”, he assured.