Pope outraged and embarrassed by abuse of Indigenous Canadians 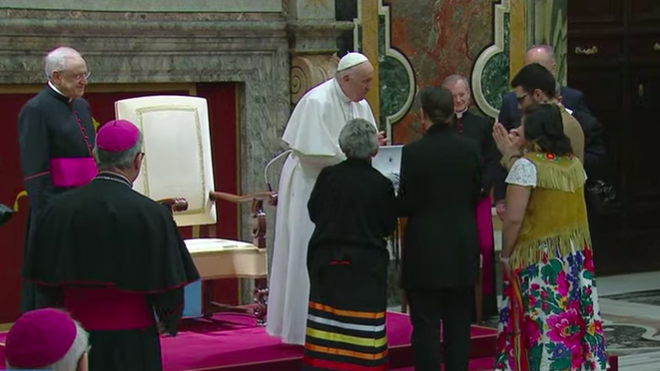 The Sovereign Pontiff gave the closing speech of the series of meetings held this week with representatives of Métis, Inuit and first generation groups, accompanied by their respective bishops, to listen to their testimonies.

Through your voices, I was able to touch with my hand and internalize, with great sadness in my heart, the stories of suffering, deprivation, discriminatory treatment and various forms of abuse suffered by many of you, especially in boarding schools, Francis said. .

The pope found it frightening to think of the desire to inculcate a sense of inferiority, to cause someone to lose their cultural identity and to cut their roots, with all the personal and social consequences that this involved and continues to involve, to through unresolved traumas that have become intergenerational.

The Bishop of Rome also expressed “pain and shame” for the role played by several Catholics, especially with educational responsibilities, “in all that hurts them, in the abuses and lack of respect for your identity, your culture and even your spiritual values”. .

All of this is contrary to the Gospel of Jesus, the pontiff stressed, asking God’s forgiveness “for the deplorable behavior of these members of the Catholic Church” and emphasizing that “I would like to tell you, with all my heart: I am very sad.”

The papal audiences are part of a process of acknowledging and asking for forgiveness for the abuses committed by the Catholic Church in the work of evangelization of the communities of origin in Canada.

Among these was the forced entry of students into government and clergy-run boarding schools, such as the Kamloops Indian Residential School in the province of British Columbia, on whose grounds the remains of 215 of they were found in unmarked graves in May 2021.

The Supreme Pontiff referred to the “shocking discovery of the remains” during the Sunday Angelus prayer on June 6 that year, expressing that this fact further increased “awareness of the pain and suffering of the past.”

These difficult times represent a strong demand for everyone to move away from the colonizing model and to walk together in dialogue, mutual respect and recognition of the rights and cultural values ​​of all the daughters and sons of Canada, he said. underline.

On the 25th of the same month, Canadian Prime Minister Justin Trudeau apologized for his past treatment of Indigenous people after learning of the discovery of another 751 graves on the grounds of Marieval Residential School in the province of Saskatchewan.

Between 1890 and 1997, approximately 150,000 children of Indigenous peoples in Canada were interned in dozens of government-created school residences run by religious orders, mainly Catholics, where they suffered physical, psychological and sexual abuse.