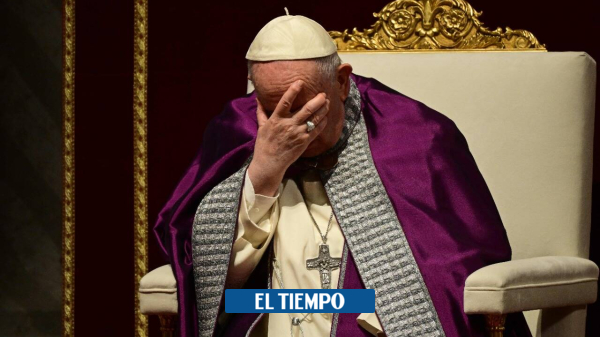 Pope Francis today apologized to Indigenous Canadians for the abuses they suffered in residential schools run by the Catholic Church during the processes of forced assimilation they suffered in the 19th and 20th centuries and announced that he hopes to visit their land at the end of July.

Francis met with indigenous Inuit, Métis and First Nations Canadians this week, who told him about the torture and abuse they suffered in the mostly Catholic boarding schools where they were taken after being ripped off to their families by the authorities.

“All this aroused my indignation and my shame,” said Francis, who then wanted to ask “God’s forgiveness” for “the reprehensible behavior of the men of the Church”.

“I beg your pardon,” he reiterated to the representatives of the indigenous peoples who have been asking the Church for this gesture for years and to whom he addressed a speech today in the Clementine room of the papal palace.

Read also: Pope Francis consecrated Russia and Ukraine to the Virgin of Fatima

In addition, Francisco announced that he wanted to visit “the lands” of these original peoples as they had requested and that he would do so at the end of July during the feast of Santa Ana (July 26), which is very revered in the country. by Catholics, before joking that I wouldn’t go “in winter” because of the cold.

In his address to the natives, dressed in their traditional costumes, the pontiff expressed his “shame and pain” for “the role that several Catholics with educational responsibilities have had in this, the mistreatment, abuse and lack of respect” for their “culture, identity and spiritual values”.

“I am very hurt and I join the bishops in asking for forgiveness because it is obvious that the faith cannot be transmitted with something that is totally far from the same faith. It is terrible when an act against the gospel is committed in the name of faith,” the pontiff reiterated.

Francis spoke of the veneration that Saint Anne has among Catholics in Canada and said to them: “I would like to be with you these days”, which would be around July 26, and he said goodbye assuring that they would see each other in Canada where he added: “I will be able to better express my closeness to you”.

Last year, there was the shocking discovery of the remains of 215 children, students of the Indian residential school in Kamloops, in the province of British Columbia, which rekindled the tragedy of the Canadian indigenous peoples and their demand for justice.

Also read: From the Basilica of Chiquinquirá a request will be made for the peace of Russia and Ukraine

From the end of the 19th century until 1997, Canadian governments entrusted Catholic, Anglican and Protestant institutions with the education of Aboriginal children who were removed from their establishments, even without the consent of their parents, and in these residential schools, they were forbidden to use their names, their language and their traditions.

In these centers, where many of them suffered from malnutrition and died of diseases, they did not receive the same education as the rest of Canadian children, but were given household chores or other jobs. It is estimated that between 1890 and 1997, approximately 150,000 Aboriginal children were forcibly interned in hundreds of school residences and some 4,000 minors died due to the unsanitary conditions in which they lived.

Read also: Can we eat meat and chicken at Easter or not?

The pontiff condemned today these methods of “colonization” which tried to standardize the indigenous peoples but “eradicating their identity, their culture, separating families and with children victims of homologation” in the “name of progress and ideological colonization”.

It’s “chilling” what happened in boarding schools, Francisco said, explaining that an attempt was made to “instill a sense of inferiority” in these children, often causing “unresolved trauma that is become intergenerational traumas”.

– When is Easter 2022 and what are its most important dates?

– Fasting, almsgiving and prayer: what are they and how are they done in Lent?